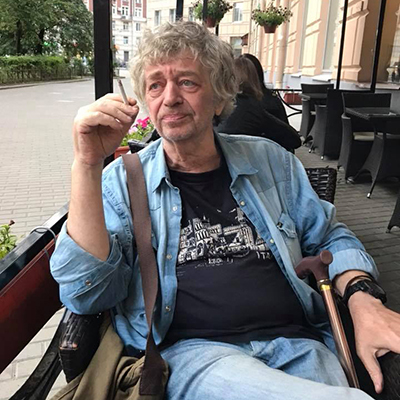 Personal exhibitions:1989 “Gallery 10-10” Leningrad, 1990 Zurich and 1991 Schwyz (Switzerland). As a part of group of caricaturists participated in two exhibitions «NJET PROBLEM!» In Germany: Munich (1995) and Berlin (1996). Many caricatures are in private collections of Germany, Switzerland, the USA. The participant of an exhibition of a caricature “Confrontation” in the State Russian museum in 1996. Some years worked as the artist on carnivals in Nice (France). In 2005 left film BBC about V.Bogorade. “Gorod812 (Citi812)”,” Day (Kiev)  works as the artist-caricaturist in newspapers».

The last 10 years, participating in international exhibitions, as a member of the jury. Over the past four years has organized four international exhibitions in St. Petersburg. Since 2008, together with Sergei Samonenko publishes a series of albums “Gallery artists caricature.” Issued for 26 albums. In 2017 he was awarded the title of Honorary Academician of the Russian Academy of Arts.