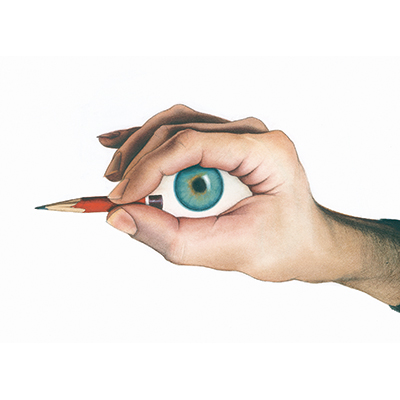 Karl Meersman (Temse, 1961) was born in the country that brought forth such artistic geniuses as Rubens and Magritte… Every week he creates two remarkable cartoons for Trends Magazine and KnackFocus.
Current affairs are an inexhaustible source of inspiration for him. He translates his views on our often bizarre world in illustrations that attract a lot of attention. This recognition is due to Karl’s continuous improvement of techniques, his own unmistakable visual language and a sense of humour with a surreal twist. His images continue to surprise readers time and again with their shrewd observational power and
unexpected associations. A joke encapsulated in craftsmanship; satire of a disarmingly friendly nature.

Karl Meersman studied art history, figure painting, publicity and engraving at various academies. He thinks of himself as a graphic artist, who is drawn to the language of humour and illustrations, and thus follows in the footsteps of renowned artists such as Félicien Rops, Toulouse Lautrec and Honoré Daumier.
Karl Meersman is the quiet observer who is driven by his fascination for man and human behaviour. For almost 30 years he has been holding up a mirror to the world of politics and economics. But he also likes to expose popular faces from the world of show business. Rather like the jester who likes to reduce the great of the earth to the level of naked emperors…