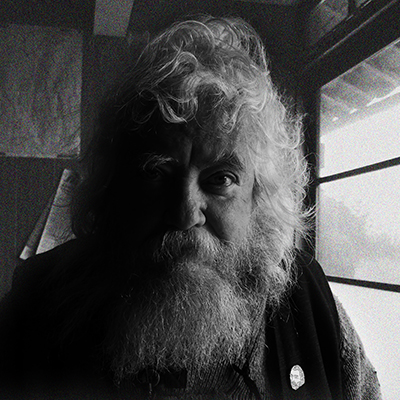 Johnny Wales is a Canadian illustrator who lives in Japan, on the island of Sado which is located in the Sea of Japan off the western coast of Honshu. Sado is a paradise island, with beautiful beaches set against a backdrop of mountains.  Its lush vegetation is unique to the island, which enjoys the distinction of being a national park, and the island’s historic port of Shukunegi is designated as ‘a zone of natural conservation for traditional buildings and architecture’. All this would explain why Johnny Wales finds the architectural heritage of Brussels so seductive. He has chosen to imagine a story around the famous house at number 6 avenue du Lac, near the Etangs d’Ixelles, built by Ernest Delune in 1906, with renowned stained glass windows by the master glass-worker Sterner. Johnny is steeped in traditional Japanese culture. He is a Bunya puppet-master, and a model-maker, and he also publishes a weekly illustration of Tokyo in Yomiuri Shimbun, the newspaper with a circulation of over fourteen million, and as such the best-selling newspaper in the world.